Posted on October 18, 2018 by loyalistpjblog 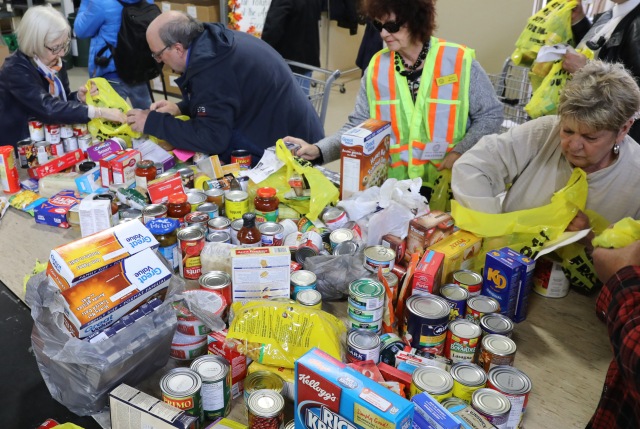 Volunteers of Gleaners Food Bank’s annual food drive sort the food that was donated by the community at the food bank warehouse in Belleville on Oct. 14. Photo by TaeHyeong Kim

A large group of volunteers surround a wide table. Soon after, many kinds of foods are poured on the table from carts. Cereals, pastas, apple juices, tomato sauces, cup noodles, crackers. The hands of volunteers get busy.

They pick up the food by type and put it in a box that is also labelled by type. The boxes are soon filled and packed and moved to the warehouse.

Outside the building, cars with food arrive and make a line. As soon as a car door opens, volunteers move the food to the cart and carry it in the building. This work continues over and over for five hours straight.

The annual City-Wide Food Drive was held at Gleaners Food Bank warehouse in Belleville on Sunday afternoon. Volunteers carried and sorted the foods for the community. Gleaners Food Bank Quinte hosted this event to help people who might have trouble getting food themselves.

Debbie Hyland is the finance and fundraising assistant for Gleaners.

“The importance of today’s event is to continue to help our neighbours. We might all have neighbours beside us who need a hand,” she said. She added that the role and vision of Gleaners is to help anyone who needs it.

About 75 volunteers participated in Sunday’s event. Some people came in a group and some participated individually. The spectrum of participants was diverse, from young secondary students to seniors. All of them had a willingness to help the community.

Barbara Lea has participated as a volunteer in the food drive for six years.

“This is my community, I live here. I just believe I have to give it back to the community. Unfortunately, there are so many people today who need financial support and food. This is the way the community comes together. It is good to help out those who are less fortunate.”

Stanley Jones, a candidate for the current city council election, participated as a volunteer for the food drive last Sunday.

It’s around 3 p.m. – the middle of the long food drive day. While the volunteers keep sorting the donated foods in the warehouse, other volunteers still wait for the five buses that have not yet arrived. Those volunteers are still out collecting food all over the city, trying to make sure that no one goes hungry.

A large group of volunteers surround a wide table filled with boxes. Soon after, a variety of foods are poured on the table from carts. By TaeHyeong Kim

Teresa Flegg makes an impressive hit against a Humber Hawks player. The Lancers took a tough loss, with a final score of 43-0. Photo by Matthew Botha

Loyalist women’s rugby a force to be reckoned with

From a shaky start to a force that is not to be messed with, the Loyalist women’s rugby team has come a long way.

In 2016, after unexpected injuries combined with the lack of numbers needed to field a strong team, the Lancers women’s 15’s team folded. Although this was a big setback for the progression of the sport, in 2017, the OCAA announced it would add four additional women 7’s rugby teams.

The league expanded to nine colleges, with all women’s varsity teams now adopting the seven-a-side game. This change was a new-found hope for the Lancers, seven a side meant that they could once again start fielding a full team. With coaches working to recruit new athletes over the past two seasons, they’ve built up a team that has far passed any expectations for a small college.

“We’ve come so far since the tryouts and everyone is one big family,” says Hanna Fitzgerald, a player for the team.

“Everyone’s starting to get it now and it really showed in our last tournament. The best part of the team is the depth – every girl on the team is worthy of starting, so when we make our subs, we know were still putting out our strongest players.”

Over the weekend, the Lancers competed in the first OCAA women’s 7’s crossover event at Fleming College in Peterborough. Teams from the east division crossed over to battle against the teams from the west. The Lancers fought a tough game against the Humber Hawks to start off the day, coming short with a 43-0 loss. They regrouped and hit the pitch hard to dominate their second game of the day with a 30-14 win over the Sheridan Bruins. With the first try of the game being scored by third-year athlete Cortney Wright, they used that momentum to keep up a strong offensive line with Rachel Streekstra and Bailey Meraw both putting points on the board. The second day saw nothing but success as the Lancers’ hard work and determination brought in wins against both 2017 League champions, the Seneca Sting as well as finishing strong with a win against the Conestoga Condors.

The Lancers will be competing next on their home turf, hosting the next league tournament on Saturday, Oct. 20. 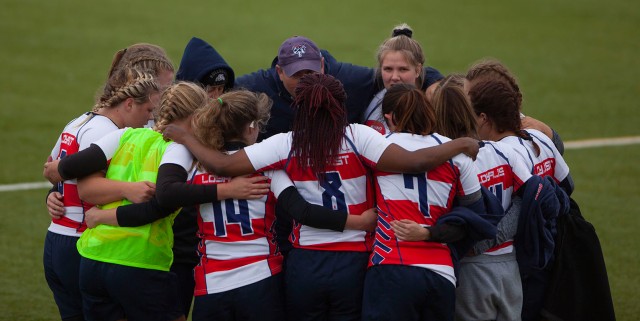 The Loyalist Lancers 7’s team rallies together after a 30-14 victory against the Sheridan Bruins. Photo by Matthew Botha

Hanna Fitzgerald kicks off during their first game of the tournament against the Humber Hawks. Photo by Matthew Botha

Lola Akindolire takes off for a strong run against the Humber Hawks. Photo by Matthew Botha

Teresa Flegg makes an impressive hit against a Humber Hawks player. The Lancers took a tough loss, with a final score of 43-0. Photo by Matthew Botha

Cortney Wright makes an impressive tackle against the Sheridan Bruins during the first-ever OCAA crossover between the teams from the east and west. Photo by Matthew Botha

Coach Ken Fitzgerald makes a last-minute sub during the second game of the day against the Sheridan Bruins. The lancers managed to come through with an impressive 30-14 victory. Photo by Matthew Botha

Weather around the province

Both fans and players alike seek shelter from the rainy fall conditions during the women’s rugby 7’s tournament held at Fleming College in Peterborough. Photo by Matthew Botha

A flock of Canada geese takes flight over a storm-battered home in Dunrobin, Ont. On Sept. 21, the tight-knit rural town was hit by a high-end EF3 tornado, with winds reaching up to 265km/h. This neighbourhood was right next to the epicentre of the storm’s devastation. Photo by Cassie Gibbons

Visitors walk through a field, back to their tractor carriage, during the Willowtree Farm’s Pumpkin Palooza in Port Perry, Ont., on Oct. 13. People were invited to fire a pumpkin out of a cannon, take a ride on a tractor carriage, and, of course, buy pumpkins. Photo by Andrej Ivanov

Hartleigh Schoneveld hurls herself upside down, enjoying the warm fall weather with their family in East Hill park, in Belleville during a recent evening. Photo by Shelby Lisk

Students pass by the leaves fallen on Devonian Pond at Ryerson University in Toronto earlier in the month. Photo by TaeHyeong Kim